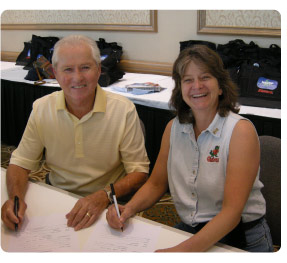 In January 1964, Drs. Frank Král, George H. Muller, James D. Conroy and Robert M. Schwartzman met in Philadelphia, Pennsylvania to discuss the possibility of establishing an organization dedicated to the practice of veterinary dermatology. At the time, Drs. Král and Schwartzman were faculty members at the University of Pennsylvania, Dr. Muller was in private practice in Walnut Creek, California and Dr. Conroy was on the staff of The Animal Medical Center in New York City and completing a year of training in the dermatology residency program at New York University. The outcome of the meeting in Dr. Schwartman’s home was the founding of the American Academy of Veterinary Dermatology (AAVD) with Dr. Král assuming the first presidency. This group formulated the initial Constitution and By-Laws for the organization and began encouraging veterinary practitioners, physicians and academicians with an interest in veterinary and comparative dermatology to join. The Academy remained small for several years with only Drs. Schwartman, Muller and Conroy attending the 1966 annual meeting in Miami Beach.

Starting in 1968, the AAVD meetings were held in conjunction with the annual meeting of the American Animal Hospital Association (AAHA). By 1969, membership in the Academy had grown from the original four members to 16 members including Drs. James C. Blakemore, George G. Doering, Erwin Small and Robert W. Kirk. The first AAVD Scientific Session was held in 1970 and was expanded to a full day of presentations by 1972. The 1971 Scientific Session “Dermatologic Diseases of Man and Animals” reflected the early interest in comparative dermatology with topics on human and veterinary cutaneous diseases, diagnosis of superficial fungal infections and cutaneous viral infections of man and animals.

Dr. Frank Král was elected as the first AAVD Life Member in 1971. He also received the first AAVD Dermatology Achievement Award for outstanding contributions to veterinary and comparative dermatology, given at the Dermatology and Allergy session of the American Veterinary Medical Association meeting in 1973. Unfortunately, the achievement award was not continued. In 2014, the AAVD Board re-established an annual achievement award in veterinary dermatology ― the Frank Král Award for Achievements in Veterinary Dermatology. The most recent Král Award winners have been Dr. Craig Griffin of the Animal Dermatology Clinic in San Diego, California (2014), Dr. James Noxon of Iowa State University (2015), Dr. Wayne Rosenkrantz of the Animal Dermatology Clinic in Tustin, California (2016) and Dr. Phil Roudebush, retired from Hill’s Pet Nutrition (2017).

As membership in the Academy grew and the discipline of veterinary dermatology matured, an organizing committee for a specialty college was formed consisting of Drs. James C. Blakemore, James D. Conroy, George H. Muller (Chair), Robert M. Schwartzman, Robert D. Kirk and Frank Král. In 1974, the Dermatology Specialty Group was granted permission under the umbrella of the American College of Veterinary Internal Medicine (ACVIM) to certify candidates in veterinary dermatology. The first meeting of the Dermatology Specialty Group was held in San Francisco in 1974. By 1982, the specialty group had grown and matured to such a degree that the group sought and received permission to separate from ACVIM and form the American College of Veterinary Dermatology (ACVD). Throughout this period, the Academy and Specialty Group or College met together for scientific sessions preceding the AAHA annual meeting. Members of the Academy and College also conducted one-day continuing education programs for practitioners attending the AAHA and AVMA meetings. Dr. Richard Anderson served as annual meeting planner for over ten years in the late 1970’s and 1980’s when attendance grew to several hundred members. In 1991, the Academy and College left the umbrella of the AAHA meeting and conducted their first stand-alone scientific and continuing education meeting in Scottsdale, Arizona. Subsequent annual AAVD/ACVD meetings have occurred throughout the United States and in conjunction with the World Congress of Veterinary Dermatology in Montreal, Canada (1992), San Francisco, California (2000), Vancouver, Canada (2008) and Bordeaux, France (2016). In 2005, the name of the annual meeting was changed to the North American Veterinary Dermatology Forum.

The first Academy newsletter was mailed to members by Dr. Erwin Small in 1974 and an official AAVD newsletter, Derm Dialogue, was adopted in 1978. Dr. Patrick Breen served as the first Derm Dialogue editor and Drs. Wayne Rosenkrantz, Karen Moriello, Phil Roudebush, Ann Mattise, Jeanne Budgin and Norma White-Weithers have contributed as the newsletter editors over the past 40 years. The first comprehensive veterinary dermatopathology seminar was organized by Drs. Richard Anderson and James Conroy on behalf of AAVD in 1977. Dr. Conroy was the instructor for 33 initial participants and the program in Boston included a half-day of lectures and a half-day laboratory session at Northeastern University. A second AAVD dermatopathology course with 39 participants was held in Salt Lake City in 1978. Dermatopathology sessions have been a regular part of annual meetings ever since these two initial courses and are now coordinated by the International Society of Veterinary Dermatopathology (ISVD).

The first research project was funded by AAVD in 1977. The study by Dr. Sharon Yaskulski explored the clinical efficacy of griseofulvin for M. canis infections in cats. In 1980, the Academy initiated a more formal grant process for funding research proposals in veterinary dermatology. Over a 20-year period, the Academy funded 38 projects with awards totaling over $130,000. These projects resulted in 32 research abstract presentations and 23 publications in peer-reviewed journals covering a wide variety of topics in veterinary dermatology. Research project funding has now been consolidated with the ACVD Research Foundation.

The Academy made a bold decision to improve veterinary dermatology research by awarding a postgraduate research scholarship. In 2001, the first AAVD Postgraduate Research Scholarship Award was made to Texas A&M University involving Dr. Kirstin Barnhard as the named researcher. The scholarship provided Dr. Barnhard an annual stipend for four years, while she completed graduate studies on the molecular basis of canine hair follicle cyclicity. In 2008, a second AAVD Postgraduate Research Scholarship Award was made to North Carolina State University and Dr. Petra Bezikova. Dr. Bizikova completed a PhD in immunology under the guidance of Drs. Thierry Olivry and Gregg Dean.

Currently, the Forum and Academy are managed by executives in the Pennsylvania Medical Society office, Harrisburg, Pennsylvania. In 2000, Veterinary Dermatology became the official scientific journal of AAVD and subscriptions are available to all members. Total membership in AAVD has grown to over 400 members living in 42 U.S. states and 23 countries. Twenty-seven individuals have served as President of AAVD since its inception (see attached list), with most still attending annual meetings.​